MILITARY RUN UA 2022
Ukrainian Military Run “Military Run UA” - is the first race to be conducted by the Armed Forces of Ukraine. It is a unique event for all Europe as the initiative belongs to the warring army. The “Military Run UA” is organized on the occasion of the 30th Anniversary. 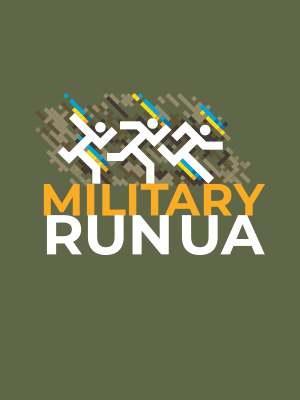 The event is open for participation to all - uniformed personnel and civilian citizens, both Ukrainians and international, veterans, and all people willing to support and show respect to the defenders of Ukraine.

We aim to unite society around Ukraine’s defenders, common values and Victory!

Among those invited to take part in the first Ukrainian Military Run:

The route is planned along the monuments that have historical military glory and have witnessed the invincibility of the Ukrainian Army from ancient times to the present. The participants will have a launching ceremony, support of cadets, lyceum students and military bands. Each finisher will receive the first commemorative medal to the upcoming collection of the annual Ukrainian Military Race.

We strongly believe that everyone can do more for strengthening the body and the spirit, for the state and the Army!

Take part in the race or just come to the event - show respect and support to your defenders! Become a part of History!

Share the information about the event with your friends, relatives, acquaintances!